We try to charge the world 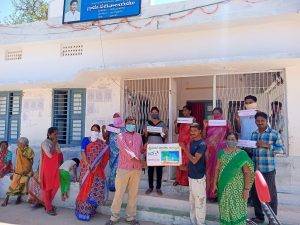 Angels in the Field giving education and awareness in Markapur rural and urban areas on importance of Protection of Environment. We Formation of Environmental groups, tree plantation contort of using plastic, protection of forest and nature.   Where conducted to expose the problem of environment degradation and decline of ecological balance of Bio-Diversity and also need of preserved conservation of Biodiversity and also under take activities to build balance has to preserve environment and ecological balance.

Andhra Pradesh government supplies sampling for the plantation for promotion Greenery in the Mandal. The villages are sensitized on the need of promotion of Ecological balance and Environment Sanitation. Plantation of shade trees extensive bases as under taken by ANGLES IN THE FILED. The colleges, schools, and other stakeholders were organized to promote these activities under the leadership of formers club, youth clubs and childrens clubs. Nearly 1000 samples were planted in this area.

The waste land and Government land are identifies and planted the shade trees for the promotion of social forestry by involving the formers clubs. Road side in bank yards and other vacant places were planted. All the houses are sensitized it plan the same shade trees and fruits trees planting back yard and also in front of their houses.